You Can’t Help Them All (Especially The Angry Birds) 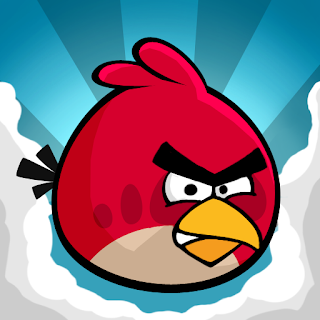 I had a tough realization this week: I can’t help everybody who needs help.

A little bird taught me this, literally.

The top of the stairwell of my parking garage has glass windows all around and a glass door that leads to the parking lot. A few days ago I noticed the door was propped open (it opens in) and a bird was trapped between the glass door and a glass window. Not squished or harmed in any way, he just couldn’t figure out how to get out. (I know it was a “he” because it was clearly trapped and refused to ask for help or directions.)

The condensed version of the story is that I spent a good ten minutes chasing that bird back and forth in that stairwell, trying to usher it through the door and on toward freedom. I tried to guide him by waving my arms. I shook some paper around to get him moving in the right direction. I even tried talking to him.

Ok, so I didn’t use the nicest language, but I’m not sure he understood me anyway. He just kept running into every window. At one point, he hit the window so hard he dropped down onto the window ledge and sat there in a complete daze. I don’t know if birds can get a concussion, but I’d bet a hundred dollars he still has a headache.

With a few more moments of prompting, he finally flew out the door. I felt downright heroic.

So maybe a minor lesson here: Helping people isn’t always easy, and it may frustrate the heck out of you while you’re doing it.

But that’s not the bird who brought me my big AHA for the week.

Exactly two days later, I was exiting the parking garage on foot and headed toward my office when ANOTHER bird literally fell from the sky — KERPLUNK — onto the sidewalk right in front of me. It was young and it had obviously failed it’s first flying lesson. Somewhere on a ledge above me was a nest, and this poor guy had decided to take his new wings out for a spin while mom and dad were out shopping for worms.

He flopped around and definitely looked damaged. And there wasn’t a darn thing I could do for him. He was technically out of harm’s way at that point (meaning, nobody was going to step on him). I couldn’t adopt him or fix him, even though I desperately wanted to. It was truly up to him and God at that point. He was either going to shake it off and learn to fly, or he was going to end up being invited to lunch by a cat.

I don’t know if he was hurt beyond repair or simply got the wind knocked out of him. Animals often surprise me with their resiliency — I saw a deer get knocked out cold by a car once, then get up and run away a few minutes later. What I did know was that this was one bird I couldn’t help.

It’s funny how the Universe sends you messages sometimes. You see, in between my two bird dramas this week, I had presented my Creating A Positive Charge workshop to a group that included some very challenging individuals (I’m now referring to them as Angry Birds…because it makes me smile). I tried so hard to reach these people, to help them, to guide them toward a happier, more positive way to work and live, and they just refused to listen, accept, and apply ideas that would truly lead them to greater freedom and a more positive impact on the world.

Throughout the workshop I treated them like the first bird, thinking I could usher them through that door. It didn’t work. I’m glad I tried, but in retrospect I realize that they were more like the second bird. I couldn’t help them, even though I desperately wanted to. It is really up to them, and they will someday realize that or they’ll continue to suffer pain and dysfunction.

Am I relieved that I can’t help everybody who needs help? Nope. It still bothers me quite a bit. But what that little bird taught me was that it’s ok, some people have to figure it out on their own, and some people truly can’t be helped…at least by me. And the world is served best when I recognize who I really can help and I focus my time, energy, and attention on them. And believe me, there are enough of those to keep me busy.