4 Words That Can Change Everything…If You Let Them 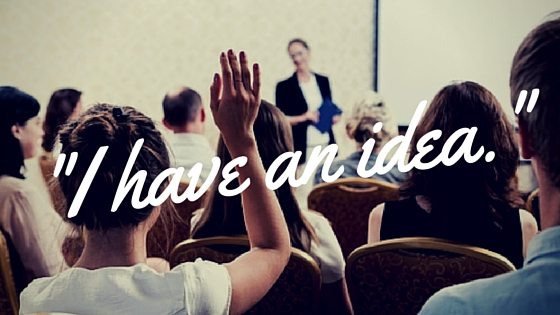 I’m a big believer in the power of words. Words give a thought its first tangible form. Words make stuff real.

You see, a concept, theory, or argument in your head is rather worthless for anything, except maybe your own amusement. If it stays there, it suffocates. There’s no air in there, no room to breathe, and no room to grow.

Only when an idea gets out in the open can it really take off. Then you can test it, build on it, and actually make it into something that benefits the world.

How many great ideas have you had that you never spoke out loud to another human being? Bouncing them off your dog doesn’t count. Sure, dogs are great listeners, but not so great at giving you honest feedback. They’re also completely unreliable when you need to build something.

We’ve all had ideas that were born, lived briefly, and died within the confines of our own brain. At last count, I had, oh, a gazillion. The only ideas that ever become real are the ones that someone is brave enough to put into words. Words are always the first step.

How many times have you sat in a meeting, had an idea you thought would benefit the discussion, and yet kept your mouth shut? I’m a bit of a blabbermouth now, so people who know me might be surprised at how many times I DIDN’T share my ideas in meetings when I was younger. I walked away from so many meetings kicking myself for not speaking up. I watched projects struggle and even fail sometimes because I hadn’t shared my ideas. I’m not saying every idea I ever had was a winner, but I know I stifled more than a few good ones.

When you put your ideas out there, you’re putting them out there to be judged. Since they are your ideas, it’s pretty easy to feel as though you’re being judged as well. That’s why it stings so much when your ideas are shot down. It feels like a personal rejection. Amd then next time you’re even more reluctant to let the words come out of your mouth…even if you know your idea is a good one.

Here are four of the most powerful words you may ever speak:

Well, they’re powerful if you actually speak them. You’ve gotta move your mouth and push enough air from your lungs so the words can be heard by other people. Then you need to follow them up with even more words that explain your idea as clearly as possible. The first four words are the hardest, though, for sure.

It is mind boggling how many times people have shared an idea with a coworker AFTER a meeting. 98% of the time their coworker responds with something like, “That’s a great idea! WHY DIDN’T YOU SHARE THAT IN THE MEETING?????????”

C’mon, you know you’ve been there.

Let’s practice right now. Say these words out loud with me:

Say it loud. Say it strong. And when all eyes turn your way, let ‘er rip.