What To Do When You Run Into A Wall

A special note: Today’s article is a little bit longer, and a bit of a different format than normal. I hope you take the extra minute to read it (really, that’s all it takes), and more importantly, I hope it inspires you the next time you encounter a wall in your life. It was extra fun to write.
———————————————————

A boy from a small, poverty-stricken village realized one day that there had to be more to life than just barely getting by trying to make a living by farming the dusty, dry land with only a small plow and his stubborn donkey. When he consulted the elders of his tribe, much to his surprise they issued a challenge to him: “Go to the city. There you will find opportunity and abundance of every kind.”

The young man had heard stories of a grand city not that far away where one could create any kind of life he desired, but he thought the stories were fantasies passed down from parents to children to distract them from their poor circumstances. However, the elders assured him there truly was such a place, but few from their tribe had enough desire, passion, or determination to follow the path all the way to the city.

“I have the desire for more abundance in my life, I am passionate about finding meaningful work, and there is nobody more determined to follow their dreams than I am,” he assured the elders.

“The only way to know for sure is to set out on the journey for yourself,” said the chief of the elders.

So the boy packed enough food and water for the trip. Since he had no idea what to expect when he arrived in the city, he also packed the small assortment of tools that had been given to him by his late father. He was particularly proud of his tools. They were the only gift his father had left him when he died because they were all his father had owned. His father had been the most skilled craftsman in the entire tribe and had created the best tools in the village. The boy had learned how to use the tools well, and had even improved some of them with his own ingenuity and craftsmanship.

Once he was packed, he saddled his burro and set out in the direction the elders had indicated. The donkey wasn’t too thrilled to wear a saddle or carry a rider, but even he knew there had to be more to life than farming the rocky soil every day.

The road stretched on and on through the barren land. It was hot. It was dusty. It was boring. But it was easy traveling nonetheless. The young man thought to himself, “This is much easier than I imagined. I wonder why others have tried to reach the city and failed?“

Although the journey was not difficult, the trip grew long and the young man became weary. He was grateful his donkey kept walking at a steady pace, but soon the donkey began to tire as well.

Eventually, both the young man and the donkey were exhausted. The food and water were nearly gone and the young man began to realize that to survive he might have to return to his village. About that same time, a shimmer of light caught the boy’s eye. The city! It was finally within sight. And it was more amazing and more beautiful than the boy had even dreamed, even from a distance. With renewed energy, the boy and the donkey resumed their forward progress. 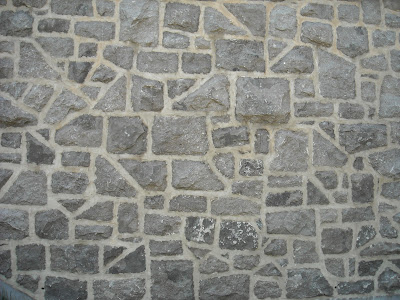 As they drew closer to the city, they encountered a solid wall encircling the entire city. It was made of stone, well over 20 feet high, and there were no gates or windows as far as the boy could see. And then the boy noticed something as unexpected as the wall itself.

An old man, older than even the chief elder of the young man’s village, was seated cross-legged on a colorful pillow underneath an equally colorful umbrella…at the exact point where the path seemed to disappear into the wall of the city. He was smiling, humming to himself, and laughing quietly every so often.

The boy sat on the burro for several minutes, looking right, then left, then up at the top of the wall. He turned to the right and rode away from the old man for an hour, but found no opening. So he turned back and rode past the man for another hour in the opposite direction. Still no opening. Finally, he returned to where the man was sitting, still smiling, humming to himself, and laughing every so often. This was where the path ended, the boy thought, so the answer must be here.

The boy sat in the saddle, drank the last few drops of his water, and muttered to himself “I’ve traveled so far and endured so much dust, heat, and boredom on my journey. I can’t believe I am this close and cannot reach the beautiful city on the other side of this stupid wall!“

“Did you find the door?“

The words startled the young man because he had forgotten the crazy old man was still sitting there on his colorful pillow under his colorful umbrella.

“I rode an hour in both directions. I found no door, no window, and no gate. I couldn’t even find a single crack or hole in the wall.” The boy was polite to the old man, but clearly frustrated by his situation and still searching the wall for an opening or a way to climb over. He found neither.

The boy was confused, but answered the question. “I am the strongest, most able-bodied young man in my whole village. I’ve never been sick, not even for a single day.”

“Have you any tools?” asked the old man.

The young man resumed looking right, left and up at the top of the wall as he responded half-heartedly, “Yes, I have the best tools in our whole village. My father gave them to me. I’ve even crafted some fine tools myself.”

The old man continued his bizarre conversation. “Then you have two choices.“

“Tell me, old man, what are my choices?“

“Your first choice, which almost everyone like yourself makes when they arrive at this very spot in front of this very wall, is to turn around and ride back to your village. Your old life awaits you there, where you will continue living the life of poverty that you are familiar with until you die, as your father did before you and your grandfather did before him. Your old friends will welcome you back and ask you many questions about your journey, for most of them will never travel as far as you have today.“

“That choice holds absolutely no attraction for me!” said the young man, his tone a mix of defiance and fear.

“There is an alternative. But I’ll warn you, it’s not the choice most are willing to make, not because of the difficulty, but because of the responsibility required once the decision is made.”

The boy thought the old man was starting to sound a bit too mystical, so he inserted his next question impatiently before the old man could continue. “What is the second choice?“, he asked.

The old man grinned and replied in an even more mystical tone, “Start where you are. Do what you can. Use what you’ve got.“

“Old man, I’m tired, I’m hungry, and I’m in no mood for riddles,” the young man said as he slumped even more in his saddle. The donkey snorted in agreement.

“Then let me put it in a way even a weary young traveler will understand: This is a special city, and entrance is reserved for only the most worthy, not the most weary. You have the tools. You have the ability. You have the determination. You have everything you need to be successful in your quest. But to reach the place you so desire, you must first get off your ass and make your own doorway.“

The old man smiled, started humming to himself again, and laughed quietly every so often. As the young man climbed out of his saddle, he smiled, too, because he knew that he would soon enter the city.