We Should All Be This Cool 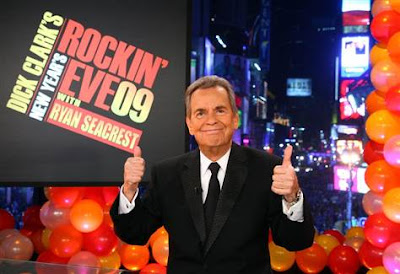 Back in a previous life I was a radio DJ. I was in the studio one day when my friend, Mike (also a DJ), got a chance to interview Dick Clark. Dick was opening one of his American Bandstand Grills in Columbus and he was doing promotional interviews to help build excitement about the grand opening of the restaurant.

Dick called in at the appointed time. Not his secretary, Dick himself dialed the phone. Nice touch. Mike answered the phone and started chatting with Dick for a few minutes. Mike was the DJ on the air at the time, so he still had to monitor the music and commercials. At that time radio was just entering the computer era, so we still had to do many things manually. A commercial block was coming up and Mike knew he had a few buttons to push, so he said “Dick, I gotta put you on hold.“

As soon as Mike hit the hold button, I pointed out to him that he just put the most powerful man in entertainment on hold. I’m going out on a limb here and guessing that very few people in the world ever put Dick Clark on hold. I honestly thought he wouldn’t be there when we picked the phone back up.

To our surprise, Dick was still there. Mike apologized for putting him on hold. Dick said, “Not a problem at all, I was just paying some bills.” And the interview continued.

Dick Clark, the most powerful man in entertainment, was genuine, humble, and funny. It wasn’t an act. It wasn’t because he was promoting his new restaurant. There’s a reason this man made it to the top. He treated other people well. Even when he didn’t have to.

I think about that day whenever I don’t treat people nicely, and believe it or not, I don’t always treat people nicely. I have my moments of mean, especially with telemarketers. I’d like to think that Dick was mean to telemarketers, too, but I’m pretty sure he treated them with the same kindness, patience and respect that he showed Mike in the studio that day.

Be genuine, humble, and have a sense of humor today. I’ll do it, too. And won’t those telemarketers who call our houses be surprised!