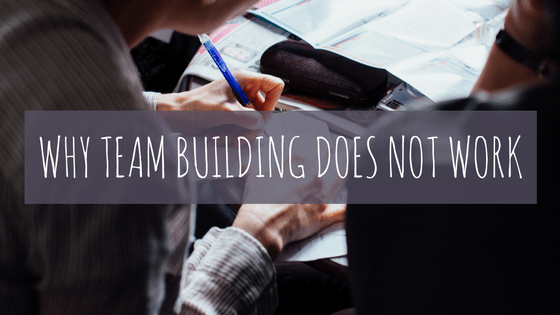 I don’t believe in traditional team building anymore. Why? Because it doesn’t work. I know this because I used to facilitate a ton of it.

Traditional “team building” involves games and activities designed to (supposedly) help teams learn a concept or improve a skill — specifically the “soft skills” — like communication, collaboration, and creativity — that are so desperately lacking in many teams.

So, we play games, have a few laughs, and then “debrief” the activities afterwards. You know, to pull out the “learning” we were after.

Over time, I have realized that traditional team building rarely works the way the leader, or team, wants it to.

So, what DOES work to build better teams? The short answer: Team Bonding. But, what is team bonding? Team bonding retreats are shared team experiences that encourage team members to interact in a non-work kind of way. They are free from skill-building or problem-fixing expectations. They exist simply to create shared experiences that encourage relationship building (i.e., create bonds). Team bonding retreats can also be quite memorable and often become an important part of company lore and culture. Check out the link above for some creative team bonding ideas!

Do we need stronger skills as teams? Absolutely. But I believe with all my heart that skill building is far more effective one-on-one. However, if you want to build a stronger team, build stronger bonds.