Negative Energy: The Worst Violation Of All

“YOU got a parking ticket????” I asked my dad in complete disbelief. The level of my shock was in direct proportion to the 20+ years my dad spent teaching Driver’s Ed.
“Read it,” he said with a grin. For a 76-year-old dude, he can look quite boyish and mischievous at times. 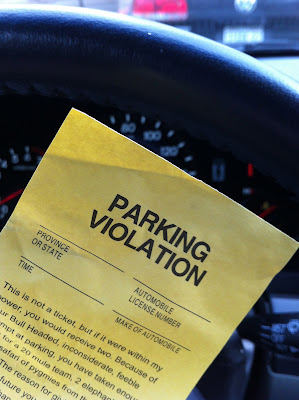 The “ticket” read like this (typed exactly as it appears, typos and all):
“This is not a ticket, but if it were within my power, you would receive two. Because of your Bull Headed, inconsiderate, feeble attempt at parking, you have taken enough room for a 20 mule team, 2 elephants, 1 goat and a safari of pygmies from the African interior. The reason for giving you this is so that in the future you may think of someone else, other than yourself. Besides I don’t like domineering, egotistical or simple minded drivers and you probably fit into one of these categories.
I sign off wishing you an early transmission failure (on the expressway at about 4:30 p.m.). Also may the Fleas of a thousand camels infest your armpits.
WITH MY COMPLIMENTS”
As soon as I finished reading the ticket, I had two immediate thoughts. I guarantee at least one of these thoughts is going through your head (and it’s probably #1):
1. Where do I get a pad of these to keep in my car? I could have given out three of these LAST WEEK!
2. Wow. Do people with this much negative energy really exist?
Did I mention this happened during CHRISTMAS SEASON? You know, the peace on earth, goodwill toward fellow drivers time of year?
This person has no idea how destructive this little negativity manifesto could potentially be. Imagine for a minute that it wasn’t my totally good-natured, laid-back dad who received this.
What if it was:
And then they get this clever little violation on their windshield. How will they treat the next person they run into? Pretty good chance of a downward spiral, don’t you think?

I won’t lie, I can be pretty judgmental. I get pretty perturbed when someone parks too close to me, decides to stand in a doorway, or bumps me with their shopping cart. Even though it sometimes feels like these things happen “all the time”, the truth is that they are few and far between. And none of them is life and death. And none of them deserve my anger.
Oh, but it’s sometimes hard to resist.
Resist anyway.
This type of resistance makes the world a better place. It has since the beginning of time.

“Be kind, for everyone you meet is fighting a hard battle.” — Plato

Not to mention, what goes around tends to come back around. I’m pretty sure the person who issued my dad this parking violation has a whole pad full of bad karma coming his way. I’m hoping it’s the “fleas of a thousand camels” variety. This reason alone should make you check right now to see if you’re putting out too much negative energy.
For the record — according to my mom — dad did a fine parking job and in no way deserved this ticket. Personally, I think he likes having the story to tell. But, my dad is kinda awesome that way.