We Lost $202 Million, But Gained So Much More 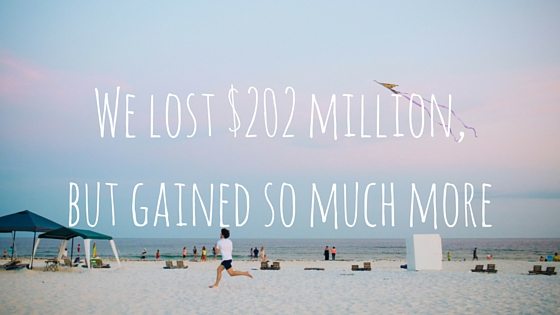 My family lost $202 million this weekend.

Thats what we would have in our bank account if we hadn’t lost the lottery this weekend. I know the exact amount because I saw it on a billboard at 4pm on Saturday. We were on our way to spend the night at our cabin. My wife said, “We should buy a ticket!” We both agreed that the little country gas station we pass on the way to our cabin  is exactly the kind of place that would sell the winning ticket.

DISCLAIMER: I am NOT a fan of any lottery…or casinos, or slot machines, or dog fighting, or turtle racing, or any form of gambling for that matter. I agree with Dave Ramsey that lotteries are basically an extra tax on the poor.

That said, just for fun we bought FOUR tickets on Saturday, one for each member of our family. Of course we agreed to split the winnings, so I’m not sure why we actually needed four tickets. I guess we thought it gave each of us more a feeling of ownership over our rather large future bank account.

Powerball tickets are $2 each, so we spent $8 total, which I consider to be the best $8 we’ve spent in a long time, even though we lost $202 million in the process. Let me explain:

Everyone Loves To Dream

Imagining what it would be like to suddenly have $202 million sparked a pretty lengthy discussion between me, my wife, and my two teenagers. If you know anything about teenagers, they’re not typically up for a lengthy discussion about, well, anything. They have an uncanny ability to answer even open-ended questions with one word answers. But ask them about how life might change if their allowance was increased by a couple hundred million bucks and they get pretty chatty.

Not only was the discussion lengthy, it was fun and enlightening. I learned a lot about what is important to each of my family members. I learned not just what they would buy, but what they would DO if they won the lottery (i.e., if money was no object). We all had different answers. None of our answers were right or wrong, they were just…us. Our answers revealed a lot about our needs, desires, and values. Also, nobody said they would buy a new family, so that was a relief.

A Better Way To Engage

I’m a future-thinker and an idea generator, so I do a lot of “what if” thinking. Normally when I try to engage my family in a discussion about the future, they roll their eyes (especially the kids) and say things like, “Chill out, Tony Robbins.” Not this time. This time they engaged fully in the conversation. This time it wasn’t ME asking them what they would do, it was the possibility of winning, the possibility of their wildest fantasies actually coming true that got them excited enough to share their thoughts in multi-word answers.

So none of our four tickets won the jackpot. We’re ok with that. We didn’t expect to win. We did, however, learn more about each other in that one conversation than we’ve probably learned in the last several months, and we had a super fun time doing it. So we lost $202 million, but we gained so much more.

Let’s have some fun and dream BIG together!

What would YOU do if you suddenly found $200 million in your pocket? Share one thing or a whole list. Have some fun, dream BIG, and leave a reply below.