How To Stand Up To A Bully 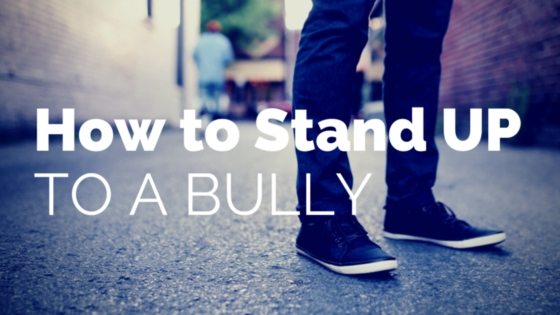 We just finished another election season and we’re headed full-speed into a Presidential election year. That means there will be lots of people stating their beliefs about issues and candidates. There will be even more people debating and arguing against those beliefs. It will get ugly, as it always does.  It’s what happens in a democratic society with free speech. I’m actually ok with that. Yes, I wish people would always treat each other nicely and respect differing opinions, but I realize those things fall just under the “butterflies and unicorns” section of my utopia wish list.

What does bother me about our free speech society, however, is that it also brings out the bullies. There are trolls everywhere just waiting to pounce on anyone with differing beliefs and opinions. The problem with these trolls is that they are very effective. Most bullies become bullies by honing the craft of bullying into a Jedi-like mastery of insult and injury.

One masterful bully can shut down a hundred reasonable voices. People in general are very sensitive creatures. It doesn’t take much to bully someone into submission…or at least into keeping their mouth shut in the future. If you’ve ever spoken/published your ideas or opinions in a public forum (like, say, Facebook) you know exactly what I mean. It doesn’t take long for a bully to attack your ideas or twist your words out of context.

You can’t win a bout against a bully, and you can’t punch them in the nose like we’ve been taught in the movies. I’ve been drawn into more verbal fight clubs than I wish to admit, thinking I would prove to the world — and the bully — that I’m right and they are wrong. Not once did I even come close to winning. You can’t even get in the last word!

I’ve wondered for years how to stand up against a bully effectively. Through lots of trial and LOTS of error, here’s what I’ve discovered about bullies: bullies only win if you fight. Fighting gives them power — they feed on the fight. If you don’t fight, they have no power. Zero. None. Nada. They deflate quickly or leave the area in search of a fight elsewhere. Either way, they’re not your problem anymore.

How To Stand Up To A Bully

Check your motivation first.
Are you trying to let people know where you stand or are you trying to convert people to your way of thinking? In my experience, the conversion thing is usually an attempt to make myself feel more “right.” Oh, and it is IMPOSSIBLE to convert a bully anyway, so don’t waste your energy.

Resist the urge to retaliate.
Bullies WANT you to fight, so they intentionally say things to entice you into arguing. They know exactly how to push your buttons. I want to fight back so bad sometimes I find myself typing a response as if I’m possessed by an external force. It’s even worse when it happens in person because I can’t delete things I say out loud without thinking. Must. Resist. The. Urge.

Let the bully flame out.
When you disengage from a bully, they fizzle FAST. I recently had one try to pick a fight with me in three consecutive comments on a Facebook post. I just ignored him and only engaged with people who weren’t being a-holes. He went away. They always do.

Delete if needed.
This applies whether you’re online or in person. Sometimes you just have to walk away. I’ve deleted Facebook posts that got ugly and I’ve physically left the scene when a bully takes over a face-to-face conversation. That way I keep my blood pressure at non-stroke levels and I remove the temptation to say things I really shouldn’t say to another human being.

By all means, take a stance. State your opinion. Share what you believe to be right. I wish MORE people would have the courage to do so. How great would it be for you and I to know exactly where the other person stands…and still be friends? No arguing needed, no evangelizing required, and by all means, no bullying allowed.

What do you think? Can we make that happen?