How To Sell A Ferrari 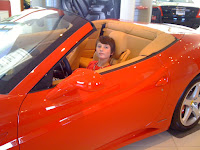 Well, he hasn’t paid for it yet, and he won’t actually take possession for a couple of decades. But he made the decision. A Ferrari it shall be.

Some quick background: after a father/son bonding experience getting haircuts (not matching, FYI), we decided it would be fun to go look at cars that cost more than my first house.

As we entered the Ferrari dealership, the salesman greeted us with a warm welcome. To be honest, I half expected to be thrown to the ground, beaten silly, and interrogated by some former special-ops-commando-turned-sports-car-bodyguard. I gladly accepted the warm welcome instead.

I then had to sheepishly admit, “We’re just here to fantasize a little. Is that ok?“
It was more than ok. “Hop in!” said the salesman to my son.
“Really?” blurted the boy excitedly.
“REALLY?” blurted the boy’s father (although mine was more of an blurt of disbelief rather than an excited question kind of blurt).
“Really! Hop in!” our new best friend hollered as he disappeared into his office.
And so the 10-year-old with the new haircut hopped into the driver’s seat of the $219,000 icon of speed, craftsmanship and luxury. The salesman reappeared with the key and handed it to the boy.
“Stick it in then push that button over there.“
My heart began to race and my head began to spin. Did he really just tell the kid to start the engine of a quarter million dollar sports car? I simultaneously replayed the Porsche scene from Ferris Bueller’s Day Off while calculating how much money I could raise from the sale of everything I own in case this all went horribly wrong.
The engine roared to life. My son’s smile almost outgrew his face.
That was the moment he bought a Ferrari.
I think I could write an entire book of lessons from this one memorable event. For the sake of time, though, I’ll let you create your own lesson. Maybe it’s about creating desire for your product or service. Or maybe it’s about treating everyone like a valued customer, even if they don’t appear to be in your current target market. Or maybe it’s about the power of making a dream come true. You pick.
I’d love to hear what this story brought to light for you. If you’ve got a moment, leave a comment!