How To Give Everybody What They Need 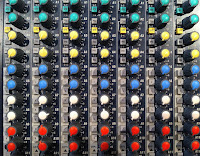 Ever see a sound board in a recording studio or at a concert? You know, the kind with hundreds of knobs, buttons, and sliders, and banks of blinking lights that rival the bridge of the Starship Enterprise?

Why do we have so many monitors?

As the guy at the sound board, it’s my job to not only mix the music for the general audience, but to also make sure all the performers get the right mix for them. I’ll be honest, mixing the overall sound for the audience is way easier, partly because I’m in the audience (our sound board takes up the back row of one of the sections) so I know exactly what it sounds like.

But the monitors? That’s a different story. I can push little buttons on the board and hear what’s being sent to each monitor through my headphones, but depending on how loud the main speakers are, how many people are in the auditorium — and about eighteen other factors — the sound coming out of any given monitor and the sound coming through my headphones can be drastically different.

This leads to some very creative, and tragically inconsistent sign language between the people “on stage” and the crew at the sound board. One person will point to the keyboard and then point “up” to indicate they need to hear MORE keyboard in the monitor. Simultaneously, a person on the other side of the stage will point at the keyboard and then point “up” to indicate the keyboard in their monitor is TOO LOUD. I just thank God I’m not relying on them to tell me if it’s safe to cross the street.

There are several key actions that I must take each week if I want to make sure that each person can perform at his or her best during the service:

1. I ask them what they need before we begin.
2. I set the levels to their preference.
3. I walk up to the monitors during our “sound check” so I can hear exactly what they’re hearing.
4. Once the service begins, I watch each person on stage closely for those crazy hand signals.
5. I make adjustments as needed and watch the faces of the performers for signs of relief or irritation.

Hmmm, sounds like the role of a good manager, huh?

Let me translate the steps into workplace language:

1. Ask your people what they need to be successful. It’s not really one question. More like a series of questions or conversations where you learn what makes them tick, how they like to work, and what keeps them from being their best.

2. Set them up for success. Once you know what will help them be their best, make it happen. Get them that new laptop, turn their desk toward the window, move their chatty neighbor to another part of the building, set up a reward system. You get the point.

3. Spend time face to face with them, in their environment. See what it’s like in their shoes. Ever see the TV show, “Undercover Boss?” The bosses on that show get lots of reports on paper, but reports don’t tell the whole story, do they? There’s a whole world of information you can only gain firsthand.

4. Check up on them. Don’t just monitor their production or their “numbers.” Monitor their needs. Sometimes you’ll see things they’re not mentioning because they’re too busy. Are their light bulbs burned out? Are they spending too much time fighting with the 10 year old copier? And if you’ve established a good relationship with them, they’ll tell you exactly what they need to keep rockin’. But sometimes only if you ask.

5. Adjust as needed. Over time, you have to monitor less and less, but you should never assume everything is set and you never need to adjust again. Stuff happens. Always does.

I know way too many managers who try to manage everything without ever crossing the threshold of their office. If your boss is like that, this might just be one of those articles you print out and anonymously place on his/her desk. Of course, if they’re that kind of boss, they may never leave their desk, so you’ll have to be creative. Hey, maybe this article will help YOU, too!