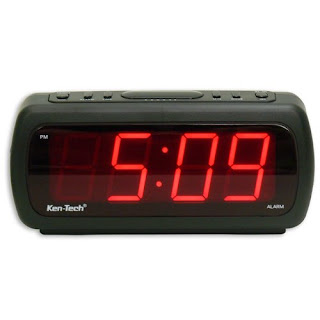 Except for superhumans and my grandfather, most people do not have the natural ability to wake themselves up before sunrise. That’s why God invented the alarm clock.

Ahhh, the alarm clock, the amazing wonder of technology that tells us what time it is in the middle of the night and casts its ever-present red, blue, or green glow over us while we sleep. It helps us get our kids to school on time and prevents us from missing those all-important morning staff meetings. It is our guardian, our protector, our advocate. It’s a tiny timekeeping life coach, holding us accountable to at least one commitment every single day — getting out of bed at whatever time we promised ourselves we would.

Leadership is like an alarm clock. Part of the role of a leader is to be a guardian, protector, and advocate. Another part of leadership’s role is to coach, develop, and inspire those they lead. And perhaps the least favorite aspect — by all sides — of leadership is holding people accountable.

When you’re a leader, people often feel the same way about you as they do about their alarm clock. Your mission is to get people moving, but most people don’t really want to and a few actually want to throw you out the window.

Nobody likes to be held accountable, but most people need it — even crave it — from their leaders. Sadly, most bosses don’t even try to do it. Notice I say “bosses” and not “leaders” here. Bosses micromanage. Leaders hold people accountable. Big difference.

Holding people accountable is trusting in a contract and checking to make sure the contract was fulfilled. Micromanaging is hovering over people at every detail and then telling them how to do it “the right way.”

The difference between holding people accountable and micromanaging is exactly the same as the difference between an alarm you can shut off and one that never stops its annoying beeping. Both alarm clocks might startle you at first and you might be tempted to throw both of them out of the window, especially if you weren’t really ready to get up.

Leadership, however, makes a contract with you (sets the wakeup time), monitors the progress of that contract every so often (checks the time), and goes about its other duties until the contract is complete (waits for the alarm to go off), then creates a new contract with you.

There’s a lesson for both sides here:

Leaders: make agreements with your people, then trust them to get the work done. Check with them at your agreed-upon times. And, by all means, if they’re not delivering you should hold them accountable and even enforce some consequences if need be. The rest of the time, keep your beeping to yourself.

Followers: when you make an agreement with your leader, HONOR THAT AGREEMENT. Meet your deadlines. Deliver the quality you promised (i.e., that quality that’s expected). And if you can’t, communicate that early and often. Renegotiate the agreement if you have to. If you don’t want to be micromanaged, DON’T REQUIRE IT by being mediocre.