I was once an accessory to a crime. Not a break-the-law kind of crime, more of a crime of decency and fair play. And I will do everything in my power to never let it happen again.

Let me reconstruct the crime scene for you. 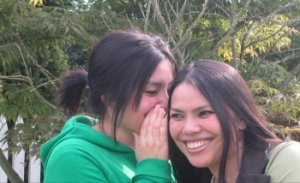 Years ago at one of our kids’ sporting events, I sat next to some of the other parents as we watched our boys becoming men on the athletic field. Directly to my left was the dad of one of my son’s teammates. He was one of those very active dads, always there to cheer on his kids in whatever sport they were currently playing. On the surface, he looked like super dad. He was also a humongous gossip.

As the game dragged on — as little kids games sometimes do — the small talk among the parents eventually started to dwindle. To a gossip, however, this is prime time to take the stage. The warmup act is over, now it’s time for the real dirt.

This particular gossip session started with “Did you know that she…” and proceeded to outline some particularly quirky habits of one of the other parents. Granted, the subject of the gossip is an interesting character, and I had wondered more than once about some of her behavior. I should mention that the subject of the gossip was actually helping coach the kids, so she was nearby but well out of earshot.

The gossipping dad went on and on, laughing about the quirky mom and telling second-hand stories about her antics. Although there were several parents listening, I was the one sitting right next to the gossip. So I smiled politely and even laughed a little at a few of the more bizarre stories. I also silently reminded myself to never tell this man anything personal about me, my wife, or my family.

It is important to note that I didn’t say much of anything. In fact, I tried my best to watch the game and NOT say anything because it was gossip plain and simple and I really didn’t want to be associated with it. I certainly didn’t want to fuel any more of it by actively contributing to the conversation.

His phone rings. It’s his wife who apparently couldn’t make it to the game that day, but wanted to check on how things were going. And then THIS happened:

“Mark and I were just sitting here talking about (quirky mom lady). Did you know that she…” and then he started an instant replay of the gossip we had just received live and in person.

WHAT????? “MARK AND I“???? When, exactly did this turn into a WE thing? I was just sitting there!!!! I wasn’t even participating!!!! Now all of the sudden I’m The Sundance Kid to his Butch Cassidy?

My head started to spin. I felt sick to my stomach. I honestly think I looked around for a blunt object to strike him with. It’s hard to remember, I was in a bit of a daze. I get that way when I feel violated.

I spent hours trying to make sense of it. Why would he do that? I wasn’t gossipping. I hadn’t said any of those things. In my quest for answers, I put him on trial in my head, convicted him, and sentenced him to an imaginary life sentence of duct tape over his mouth. And I felt so righteous about it all.

Until it dawned on me that I was guilty, too. Maybe even more guilty than he was. I was guilty of “gossip by association.”

You see, I heard what he was saying and identified it immediately as gossip, but I didn’t do a darn thing about it. And my polite smiles and laughs DID fuel the fire because they gave approval to what he was doing. I pretended like my relative aloofness kept me out of his gossip bubble. I failed to realize how much my close proximity made me an accessory regardless of my level of participation. And being the one sitting right next to him? Well, apparently that made me his partner in crime.

Life teaches lessons in the most unexpected ways sometimes.

Gossip is a second-hand story told by a first-class bonehead.

Gossip is like an addiction. Gossips do it without even thinking about it. It comes naturally to them. It gives them temporary pleasure. It makes them feel important. And they desperately need to feel validated, so they look for any tiny bit of approval they can get. A nod, a smile, an agreement. If you jump in and join the gossip, they almost explode with joy because you’ve made them feel RIGHT.

I’ve only figured out three ways to stop gossip, or at least distance myself so I’m not a gossip by association.

But what about the true gossip addicts that just won’t stop? They’re easily identified because they defend themselves by saying things like “Uh-huh! I heard it from his sister’s uncle’s best friend’s golfing buddy who told him last year when they ran into him on that cruise ship in Mexico.” They don’t even realize how ridiculous it sounds. If this is the kind of person you’re dealing with, I’d go with option #1 above ASAP. And maybe the blunt object.

By the way, THIS TOTALLY APPLIES TO WORK, TOO. Gossip is one of the most destructive forces on earth and it can destroy a company from the inside out in a very short amount of time. It sends negative ripple effects that actually intensify as they spread. In case you’re wondering, that’s, um, really, really bad.

Here’s the executive brief of this whole article: Gossip is bad. If you stand by and let it happen, you are just as guilty of the crime as the person telling the story. And if you think you’re not, reload this page and read it again.