Where is Your Focus On Monday? 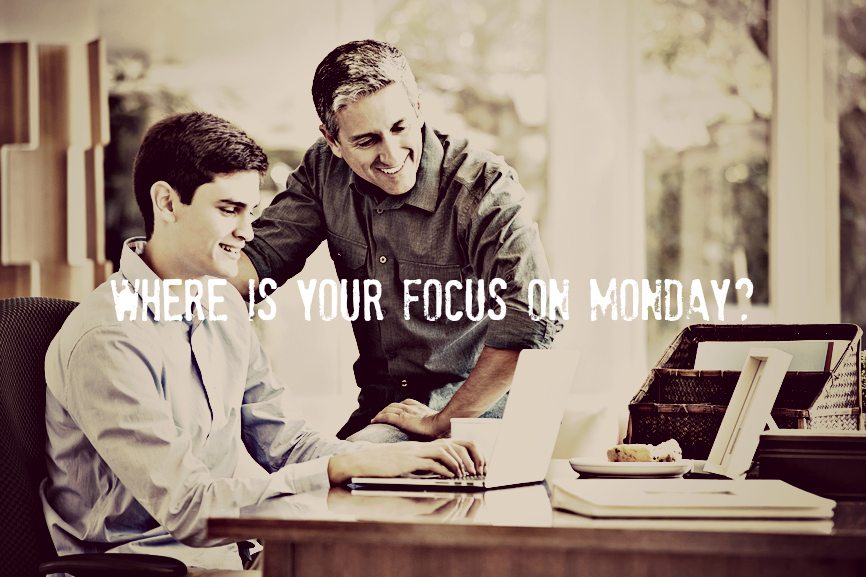 Imagine a cold, snowy Sunday afternoon. There’s a fire in the fireplace. You just finished reading a really good book, and now you’re eyelids are heavy, your body is relaxing, and you have totally accepted the fact that you are about to drift off into a lazy, luxurious fireside nap.

“So, dad, you ready to watch the tournament? It’s about to start.”

Dad — that’s me — had agreed at some earlier, much less sleepy moment to watch a League of Legends grudge match between the two top teams in the world of online video gaming. Apparently that moment was now.

Now? Yes, right now. Teenagers almost always operate in the right now. Like, “I’m hungry right now,” “I need a new dress for my concert right now,” “I would like to spend next week’s allowance right now.” There is no later or tomorrow or next week to a teenager unless they’re talking about doing their homework.

For the next hour and a half, my 15 year old played the role of commentator, teacher, and seasoned expert of the mysterious and incredibly complex world of mutli-player video games. He laughed, smiled, and patiently explained the rules and strategies to me. When he saw confusion of my face, he playfully rolled his eyes like he was dealing with a toddler who was trying to understand quantum physics. I swear he was tempted to reach over and pat me on the head at one point.

Why am I telling you this?

Because we need to focus on the good times, the positive things. They are often completely outnumbered by the negative ones. We need to remember the compliments and forget the criticisms. We need to recall the fun times and tuck away the frustrating ones.

I know which one makes me happier and puts me in much better state of mind, so I’m going to park my brain and emotions there for awhile and absorb as much of the positive mojo as I can.

Why am I telling you this TODAY?

Because it’s Monday, a day traditionally filled with moans, groans, and “Only 4 more days until Friday” jokes in the elevator. But what if Monday didn’t have to be that way?

What if you woke up each Monday and the first thing you did was to remember the positive things that happened last week or over the weekend? What if you intentionally focused on all the best stuff in your life BEFORE  you think of all the crap you have to get done this week?

Now take it one step further. What if you started your Monday conversations with your coworkers, boss, or the barista at Starbucks with a quick recap of the positive things that have happened to each of you lately? What if your staff meeting included 5 minutes up front to let each person share a positive happening in their work or life?

I’ll tell you what will happen because I’ve seen it. You’ll have a massive attitude shift for the better. Plus, the more you do it, the easier and more automatic it will become. Worth a try, don’t you think?

I typically release my articles on Tuesdays, but I’m pretty sure you get why I needed to publish this one today.