Don’t Be A Chicken 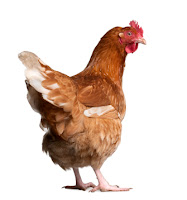 Let me tell you the secret to success in any business, any pursuit, or any relationship:

Let go of the fear of looking stupid.

It is impossible to be 100% amazing at something if you’re afraid of looking stupid.

You might recognize this fear by its other names: fear of failure, fear of rejection, or the big one: PEER PRESSURE.

I know some people get dizzy when their eyes are closed, so I’ll excuse those people from elevating themselves 2.5 feet off the ground. I’ll also let the woman in the miniskirt off the hook out of common decency.

The rest? Chickens each and every one.

They weren’t afraid of heights (we’re talking about a chair here, not a mountaintop). They were afraid of what they might look like as an 8-foot tall person in a business suit.

I think it should be stated that there was no reward at stake, but if you’ll only fully commit when a reward is involved, are you really committed to being amazing or are you just after the free stuff?

The funny thing is that there’s no reward for giving into the fear of looking stupid, unless you call status quo a reward. If I don’t stick my neck out, the BEST I can hope for is that nothing will change. Woo hoo. Big prize.

Let me share with you some people who have given up the fear of looking stupid:

Chick-fil-A is closed on Sundays. Think they haven’t been told a million times how crazy that is by about a billion different peers and business “experts”? It takes some guts to fly in the face of convention like that. It takes getting rid of the fear of looking stupid.

The irony makes me smile: Chick-fil-A ain’t no chicken.

To be honest, I have a chicken moment once in awhile. There are times I’d prefer to sit back and maybe not be noticed just this once. Then I remember that playing it safe has very little reward. I also remember that 99% of the time I drop my fear of looking stupid I am rewarded far beyond my expectations.

I’ve told people for years in my workshops that the number one obstacle for success is the fear of looking stupid. Conquer that and you can literally achieve just about anything you desire.