The Dark Side Of Feedback 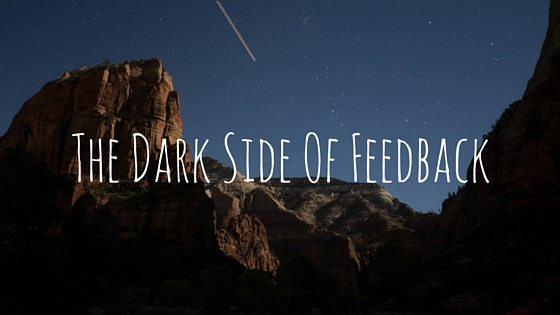 “What do you think?”

I have about fifty conversations like this every week. Sometimes it is literally this very conversation about a marketing piece we’re working on. Other times it’s basically the same conversation, but we’re talking about a process or a problem we’re trying to solve instead.

I get asked for my feedback a lot. That’s what happens when you’re the big cheese and you’ve been around the block as many times as I have. I have a lot of experience and even more opinions, and I’m often asked to share one or the other, or both.

Giving and receiving feedback is an important part of any healthy, collaborative relationship. And yet…

There Is A Dark Side To Feedback

One of the most important things I’ve learned (ok, still learning) about giving feedback is that there is a dark side. Well, DARK side is a little harsh. It’s really more of a DOWN side. But with the new Star Wars movie coming out this week, I really needed a tie-in.

So, what is this mysterious dark/down side to giving feedback?

Most feedback only makes something different, it doesn’t make it better.

For quite awhile I found myself giving “corrective” feedback to my team just because someone did something differently than I would do. If they picked green and I was thinking blue, I’d say it should be blue. If a process had three steps and I thought it should be two, I’d say make it two.

Never mind that green looked just fine and the three-step process worked extremely well (maybe even BECAUSE of that extra step).

Hey, they asked me, so I told them what I thought was better.

Turns out, it was  — way TOO often — just different.


I started noticing a certain look on the face of people I would give feedback to. It was kind of a blank look, like they were trying very hard not to react to my feedback one way or another. I interpreted this to mean they were trying as hard as they could to NOT scream at me:

“THAT’S NOT ANY BETTER AT ALL…IT’S JUST DIFFERENT!”

Don’t make this mistake. Doing so will only inform your already misguided ego that you are sooooo supremely smart and everyone NEEDS you to enlighten them and improve their efforts with your super awesome feedback, which, we have already established, is probably not all that super awesome, just super different.

I Needed A Filter On My Mouth

I decided that I didn’t like that blank look — you remember, the one they would get when they were trying not to murder me. I didn’t like the awkwardness I felt when I saw it, and once I realized that what it REALLY meant was that my feedback was probably creating needless changes and more work, I decided to do something about it. So I installed a filter on my mouth.

Now when someone asks for my feedback, I try very hard to pause long enough to ask myself, “Is what you’re about to say going to actually make it better, or is it just going to make it different?”

The difference this slight pause has made is actually quite dramatic. It has helped me build trust in my team, improved my feedback, and reduced a lot of unnecessary work. It has also led to new approaches and fresh thinking because it’s not all coming just from my head now.

Everything I’ve said in this post also applies for when I HAVEN’T been asked for my feedback, and I feel compelled to give it anyway. In the past I did this a lot more  and blamed it on the fact that it’s my company and I love it so much I just want everything to be as perfect as possible. So every time I saw something I thought should be different (not always better, mind you), I would speak up.

You might be wondering, “Geez, does he ever give good feedback?” The answer to that is yes, yes I do. In fact, I think I give better feedback now than I did even six months ago because “Different or better?” has become more than a filter for me, it’s really a daily mantra.

This has all resulted in one of the most painful realizations I’ve made yet: my way ain’t the only way to make something great.

It’s also one of the realizations that has helped me grow the most as a person, a coworker, and a leader. And the benefit to my company has been exponential.

Am I the only one who struggled to learn this important lesson? Are you still struggling with it? Tell me where you’re stuck, or how you’ve made your own improvement to feedback.