“Would you just buy a stupid cabin and STOP TALKING ABOUT IT ALREADY?”

I’m sure she said it much more nicely, but that’s pretty much what I heard coming out of my wife’s mouth.

Buying a cabin has been on my bucket list for, oh, at least a decade. I’ve been actively searching for the “right” cabin for about two years and finally started working with a phenomenal real estate agent several months ago (David Armentrout from The Raines Group, FYI).

Last week I finally bought a stupid cabin — a classic A-frame in the woods on a hill above a small, private lake. It’s basically a grownup treehouse. Of course it needs some work (don’t they all?), but it’s mine and I love it. There is no question in my mind that it is going to bring a lot of joy to me, my family, and the people we share it with for many years to come.

And it almost didn’t happen because of my own limiting beliefs and insecurities. I’d like to share three of them with you now, because, let’s face it, it’s fun to share your insecurities with thousands of other people.

Here’s why I almost didn’t check off the #1 thing on my bucket list:

1. I was afraid that if I checked off the biggest thing on my bucket list, I wouldn’t have anything else to shoot for. I guess deep down I thought once I achieved such a big thing, the next day I might shrivel up and die. It’s a twisted version of the fear of success. This is why it took me 2 years to finally buy a cabin AFTER I had decided to buy a cabin. TWO YEARS.

I finally decided there was only one way to know if this twisted thinking was true: take the plunge, buy a cabin, and see if I woke up the next day. It’s been over a week now and I’m still alive and no more shriveled up than I was before. Whew.

2. Buying cabins is what grownups do, and I’m not a grownup yet. Never mind that I’m 48 years old with a wife, two teenage kids, a couple of dogs, a business, and a house. Most days I still feel like I’m 18 years old and trying to figure out what I’m supposed to do next. In other words, I am Peter Pan.

It’s times like these I have to remind myself that I’m 48 years old with a wife, two teenage kids, a couple of dogs, a business, and a house…and none of them have crashed and burned. I am capable of taking the occasional grownup step. On saying that though, it did take us an unusually long time to find a house that we loved. Is that normal? We toyed around with the idea of moving to Connecticut after we found some great properties on williampitt.com which was recommended to us by our friends. But for a reason that I can’t remember, we decided against the move and bought a house somewhere else. That was definitely a grown-up decision. I think I would like to move to Connecticut one day though.

3. Buying a 2nd home (even if it’s a cabin) feels selfish. After all, I have a pretty nice house already and I have the resources to rent a cabin whenever I desire. There are people around the world living in cardboard boxes. Heck there are people in my own community living in cardboard boxes. And I’m buying a 2nd home that I’m only going to use part of the time? Believe me, my conservative Christian upbringing was banging a pretty loud gong in my head.

I found myself rationalizing and defending my decision (mostly to myself) until I read this thought about Wanting What You Want by Dan Sullivan, founder of Strategic Coach. Dan makes the case that when you admit that you want something simply because you want it, you experience a pretty amazing level of freedom. This approach believes in the abundance mentality — it’s not an either/or proposition. The opposite is scarcity mentality — believing there isn’t enough to go around. I’m almost always an abundance thinker, but I had temporarily slipped into scarcity mode when it came to this stupid cabin. Thankfully, I slipped back out.

I know I’ve called it a stupid cabin three times now, but it really is awesome and I feel very fortunate/lucky/blessed to finally hold the keys. The whole process has been a pretty big growth experience for me, and will continue to be as we make our mark as the next owners of this retreat. And I’m sure this won’t be the last time I have to fight my way past some limiting beliefs to make something happen.

Now I just need to get a bed in the stupid cabin so I can actually spend the night there. 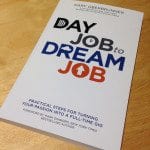 I�m still running a comment contest each week. I think I may just run the comment contest until the comments stop being so darn good (really, go back and read them)! Each week we toss all the comments in a hat and pick one commenter to win a prize. This week I�m giving away a copy of Day Job To Dream Job by my friend, Kary Oberbrunner

Last week�s post winner of a copy of The Big Leap was Chuck Clark! Congrats, Chuck!