My Top 10 Highlights From Big Magic 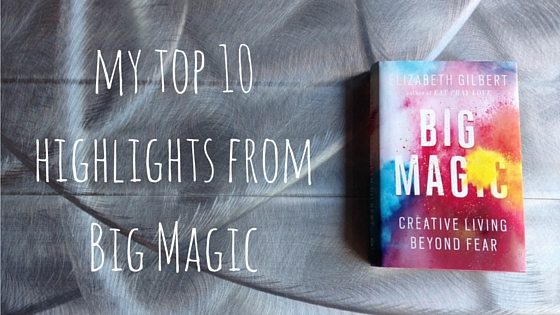 About once every six weeks I post my version of a book review, which is really just the top 10 passages that I ran over with my highlighter when I was reading it. If I share a book with you, it means I loved it and recommend it. But you read the highlights and decide for yourself if it’s a book that resonates with you.

I recently finished Big Magic: Creative Living Beyond Fear by Elizabeth Gilbert. Liz is best known for her mega best-selling memoir Eat, Pray Love. Yes, the one made into a movie starring Julia Roberts. I may be one of the few men who will admit that I loved Eat, Pray, Love (both the book and the movie), but I’m kind of an open book, which is probably why I like her writing so much.

My top 10 highlights from Big Magic:

Creativity is a path for the brave, yes, but it is not a path for the fearless, and it’s important to recognize the distinction. Bravery means doing something scary. Fearlessness means not even understanding what the word scary means.

You do not need anyone’s permission to live a creative life.

Are you considering becoming a creative person? Too late, you already are one.

Speak to your darkest and most negative interior voices the way a hostage negotiator speaks to a violent psychopath; calmly, but firmly. Most of all, never back down. You cannot afford to back down. The life you are negotiating to save, after all, is your own.

Most things have already been done — but they haven not yet been done by you.

And always remember that people’s judgements about you are none of your business.

So when can you start pursuing your most creative and passionate life? You can start whenever you decide to start.

If money were the only thing people needed in order to live creative lives, then the mega-rich would be the most imaginative, generative, and original thinkers among us, and they simply are not.

Usually when I read a book, I highlight WAY more than 10 passages. This book was no exception. So, if you’re interested, here are the rest of the highlights that I thought were worth sharing from Big Magic.

Ideas are driven by a single impulse: to be made manifest.

You must learn how to become a deeply disciplined half-ass. It starts by forgetting about perfect. We don’t have time for perfect. In any event, perfection is unachievable; It’s a myth and a trap and hamster wheel that will run you to death.

The most evil trick about perfectionism, though, is the it disguises itself as a virtue. In job interviews, for instance, people will sometimes advertise their perfectionism as if it’s their greatest selling point — taking pride in the very thing that is holding them back from enjoying their fullest possible engagement with creative living.

Don’t let go of your courage the moment things stop being easy or rewarding. Because that moment? That’s the moment when interesting happens.

Interesting outcomes, after all, are just awful outcomes with the volume of drama turned all the way down.

But do not let your ego totally run the show, or it will shot down the show. your ego is a wonderful servant, but it’s a terrible master — because the only thing your ego ever wants is reward, reward, and more reward. And since there’s never enough reward to satisfy, your ego will always be disappointed.

Any motion whatsoever beats inertia, because inspiration will always be drawn to motion.

I think the fiercest question of all is this one: What would you do even if you knew that you might very well fail. What do you love doing so much that the words failure and success essentially become irrelevant?

People convince themselves that they have been robbed when they have not, in fact, been robbed. Such thinking comes from a wretched allegiance to the notion of scarcity — from the belief that the world is a place of dearth, and that there will never be enough of anything to go around.

The results of my work don’t have much to do with me. I can only be in charge of producing the work itself.

You don’t just get to leap from bright moment to bright moment. How you manage yourself between those bright moments, when things aren’t going so great, is a measure of how devoted you are to your vocation, and how equipped you are for the weird demands of creative living.

There’s no dishonor in having a job. What is dishonorable is scaring away your creativity by demanding that it pay for your entire existence.

I can’t tell you how many people said to me during those years (of Eat, Pray, Love’s wild success), “How are you ever going to top that?”…But such thinking assumes there is a “top” — and that reaching that top (and staying there) is the only motive one has to create. Such thinking assumes that the mysteries of inspiration operate on the same scale that we do — on a limited human scale of success and failure, of winning and losing, of comparison and competition, of commerce and reputation, of units sold and influence wilded. Such thinking assumes that you must be constantly victorious — not only against your peers, but also against an earlier version of your own poor self. Most dangerously of all, such thinking assumes that if you cannot win, then you must not continue to play.

Check out Big Magic on Amazon