I Want To Be Part Of The Magic, Don’t You? 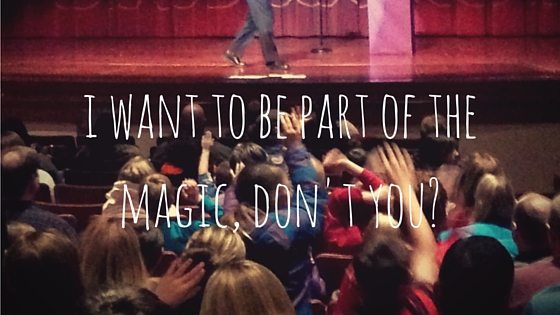 This past weekend, I took my family and my staff to Miracles & Magic, my favorite fundraiser of the year. It’s a 2-hour Las Vegas style magic and comedy show that over the years has raised over a million dollars for charities that benefit sick kids and their families. This year was the best show yet.

Two things all magic shows have in common:

As I watched the kids jump out of their seats, stand on their tiptoes, and strain to raise their little hands just a tiny bit higher than the rest, I began to wonder, “When was the last time I wanted to be a part of something that badly? When was the last time I raised my hand and yelled ‘Pick ME!!!’?” More importantly, I wondered, “When did I STOP doing that? WHY did I stop doing that?”

Why did I stop jumping up and down, pleading to be part of the magic?

There have been many times in my life when I wanted to be a part of the magic, but chickened out for one reason or another. There were jobs I wanted to take, places I wanted to go, friends I wanted to spend time with, projects that looked fun, and activities that I wanted to try. All I had to do to grab most of these things was raise my hand when the opportunity came up.

I absolutely knew when it was happening, too. Whenever magic invites me along for the ride, my heart beats faster. My palms get sweaty. I sometimes feel tingly all over or get goose bumps. That’s because magic comes standard with the fear of the unknown. We might get thrust into the spotlight. We might crash and burn. We might miss out on another, even bigger piece of magic if we say yes. It’s no wonder that even when we WANT to raise our hand and scream, “pick ME!!!”, instead we shrink a little in our seats, keep our sweaty palms in our laps, and hope the magic doesn’t even notice us.

And yet, we secretly wish the magic would yank us out of our chairs and force us to participate, don’t we? At least then we could say it wasn’t our fault if it didn’t turn out to be so magical after all.

I’m thinking again about the kids who were picked to be a part of the magic this weekend. Not a single one of them regretted raising their hand. Even if they were a little freaked out to be standing in the spotlight, I guarantee they thought it was awesome and talked about it all the way home. They’ll remember the experience for years, maybe even for life.

We never regret being part of the magic.

For that reason, the next time magic is seeking volunteers, I’m going to drop my excuses and raise my hand.